War Grave in the Burial Ground

The graves of Private Henry Bennett and Lieutenant Vivian Grey Hughes can be found in the burial ground. They served in France during the Great War. Headstones were installed by the Commonwealth War Graves Commission and dedicated by the Rt Revd Mark Sowerby, Bishop of Horsham on 7 May 2017. The Deputy Lieutenant of West Sussex and representatives of the Royal Sussex Regiment and 2nd Southwater Scouts were in attendance. 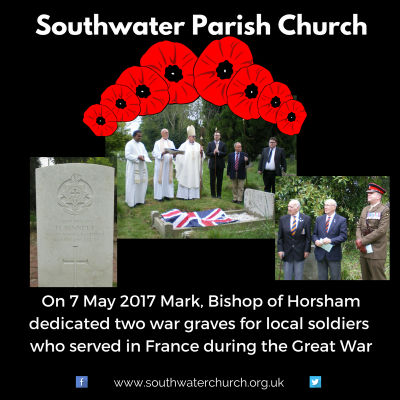 Born in 1892, Henry Bennett went to Itchingfield School. One day after his brother John signed up for The Queen's (Royal West Surrey Regiment), Henry signed up for the 2nd Battalion Royal Sussex Regiment on 11 December 1915 but was later transferred to the 4th Battalion. Although eager to serve his country, his story is a sad one.

By May 1916, after collapsing shot of breath he was diagnosed with pleurisy and hospitalised in Purfleet. A second longer spell in hospital followed in August-September 1916 but he was returned to duty. He was transferred to the 13th Sussex and was sent overseas to France, landing on 15 October 1916. Condition at the front caused his condition to deteriorate and he was re-hospitalised on 27 December. Thought to have tuberculosis (TB), Henry was sent back by hospital ship and was admitted to the military hospital at York. TB was confirmed on 14 March 1916 and he was discharged as medically unfit on 4 April 1917. He was granted a pension and eventually returned home. He died at home in Barns Green on 3 May 1919. He was buried in an unmarked grave in Southwater.

His family worked the Brickyard at Cross Lane, Itchingfield. Henry and was one of five sons.

We thank Merve Goddard for his painstaking research.

Find out more on http://www.southwaterhistory.co.uk/slhgwar/henrybennett.html

Born in Hertfordshire on 12th March 1892, he was the son of Revd Cecil Hughes who later became the Vicar at our Church in Southwater from 1921 to 1937. Lt Hughes was educated at Keeble College, Oxford. He served in France with the Rifle BOE as a 2nd Lieutenant. He was a master at the City of London School between the wars at the same time that Alan Turing was a pupil at the school. During World War I, he had been badly wounded. At the outbreak of the World War II, he obtained a commission and was sent for training at Droitwich where he suffered a bad attack of pneumonia. He died at Bromsgrove Hospital on the 8th January 1941. A funeral was held at Southwater, taken by his brother Revd C R Hughes. His father Revd Cecil Hughes and Revd R W D Lee, RD were amongst the mourners.

Lt Hughes' father, mother and brother are all buried at Southwater Parish Church.
You will find a simple grave at position G4, in the centre of the burial ground as you enter through the gate from Church Lane.

Details of those names listed in the church and on the War Memorial may be found in folder at the back of the church. We thank Robert Piper and Southwater Local History Group for researching this information.

Find out more on http://www.southwaterhistory.co.uk/slhgwar/Vivian%20Hughes.html

This memorial is on the green at Lintot Square by the Village Surgery. It is the place where we host annual services of remembrance.