History of our Church

Records of baptisms, banns of marriage, marriages and burials are available in hard copy in the church and on CD. We are grateful to Southwater Local History Group for transcriptions of the Parish Registers. Transcripts of births, marriages and deaths from 1850 to 1900 (approx) and transcripts of monumental inscriptions are held by Southwater Local History Group. If you are looking for a relative or want information from our registers please contact us and we'll do our best to help.

Holy Innocents, Southwater is a beautiful Grade II listed Victorian Church. A presentation of the Victorian and Edwardian eras of the beginnings of our church in Southwater and the key people of the time is available here as text and the accompanying slides. For some curious facts about the Parish including Christs Hospital click here. Additional images are available HERE.

During the summer of 1848, the decision was made to build a new church in Southwater on land at College Farm. One acre of land was stumped out by Henry Tylden Smith (the author of History of Southwater) and his uncle, H Charman. The foundation stone was laid on December 28 1848, Holy Innocents Day, by fifteen year old Sir Henry Fletcher, the eldest son of the late Sir Henry Fletcher of Ashley Park, Surrey. 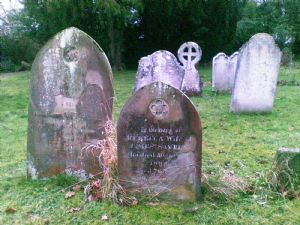 Thus our Church building was born. Whether the Church was dedicated to the Holy Innocents only because the foundation stone was laid on that day is not recorded.

The architect employed to design the building was from , Mr W Harrison, and the builder, Mr Carruther, came from . Local materials were used in the construction. The stones for the outer walls came from a stone pit at Stammerham, which is situated on Griggs Farm close to the point where the Horsham by-pass now bridges the Tower Hill to road. Stone for the inner walls was from a small quarry on Great House Farm close to .  The cut stones for the window and door reveals, arches and pillars were all from a quarry near the Sun Oak in St Leonards Forest, which was owned by Squire Aldridge. The men employed on the construction work lodged in the village.

How much did it cost?

The cost of the actual building is recorded as being “in the region of £1,800”. Some doubt exists whether this represented the full cost and donations were made by local families of substance and these may not have been included in the total sum. Records do show, however, that in 1906 the Church was re-insured in the sum of £2,000.

In 1850, the Consolidated Chapelry of Southwater was formed out of the south of Horsham Parish and the north of Shipley Parish. The Church was consecrated by the Bishop of Chichester, Bishop Gilbert, on 7 June 1850. 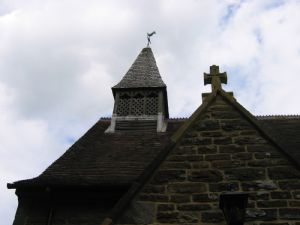 The belfry is of timber construction under a cedar shingle roof and houses a single bell. This was cast by C & G Mears, Bell-founders of London, in 1850. It is almost 17 inches diameter and is hung on a B-frame and chimed by a solid built-up half wheel. An interesting recorded fact is that a 40 rung ladder is required to reach the belfry.

The Parsonage was constructed in 1854 by Mr Poole of on typical Victorian lines for a country house. The water was supplied from a well operated by a donkey which was often led by choirboys some of whom still relate the experience. In more recent times the upkeep and costs of heating became uneconomic and the present Vicarage was built. The original Parsonage was sold in 1968 when it became known as the Old Vicarage. Today, it is known as Southwater House.

Addition of a new vestry

In 1909, work commenced on the construction of a new Vestry to the south of the Chancel in accordance with plans prepared by a local architect, Wheeler Godman. The work cost £280, of which £200 was donated by the Fletcher family. It was completed in 1910.

Many repairs have been carried out over the years and from available records it is shown that often greater importance was attached to the costs, and in some instances the builder, rather than the nature of the works. One exception is the damage caused by high winds which were of such severity that on 11 February 1866 they brought down plaster inside the Church. Many unspecified improvements were carried out in 1864. In 1897, major repair work was undertaken by L & C Banks, starting on 3 May and completing on 18 June at a cost of £75 9s 6d. Repairs to the spire in 1915/16 gave, we are told, reason to reflect on increased costs which amounted to £9 16s 0d. By direct comparison, repairs to the belfry, which were undertaken in 1983 and included reinforcement of the bell support and re-tiling the roof with shingles, cost close to £5,000. Perhaps in

68 years’ time this too will be put into perspective. During the last war, a bomb fell on the railway line to the north of the Church, which closed the line for four days. The impact of this bomb brought down the Chancel ceiling.

The Church was originally built without an organ and a tuning fork was used to pitch a note for the choir which sang unaccompanied. An organ was first installed in 1864 at a time when other improvements were being carried out. The present organ was installed in 1981, having been reconstructed by parishioners with the help of organ builders Hill Norman & Beard.  It is a pipe organ with two manuals, built in 1880 and came from Worth Abbey. 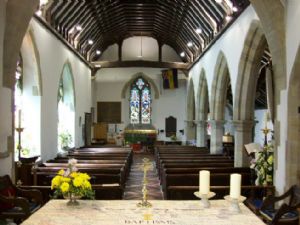 The heating of the Church has been the subject of a number of references in records. On 23 December 1888 a new heating apparatus was installed, a collection for which raised £41 1s 8d.  In 1900, when the Church was reported to be cold at the east end, this was found to be in need of a new stove pipe.  A further £75 0s 0d was spent on the heating system in 1909, but the problems were not resolved until around 1925 when Mr Piper installed hot water radiators and piping. With the addition of a modern oil-fired boiler, this system was in use until the winter of 1986/87, when the oil supply waxed and a number of the cast iron radiators froze and burst. These have been replaced with modern radiators but the main pipe runs remain. The boiler was replaced again for the cost of some £45,000 in 2012.

The windows in the south and east walls of the Church are typical examples of stained glass windows of the Victorian period and are believed to date from the construction of the building. The south wall contains both a two-light and three-light window, the stained glass of which is of recent design and construction. 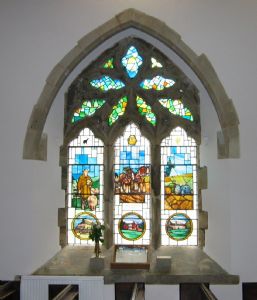 The two-light window is known as the Pipers Window, after the donors. One light depicts the Southwater Village Wheelwright and the Blacksmith in the other. Both were members of the Piper Family.

The three-light window was presented by Southwater farmers and friends. It depicts farming activities carried out in the parish together with the three main farm buildings.  It is, naturally enough, known as the Farmers Window.  A book beneath the window records the Dedication and names of donors.

The north and south windows of the Chancel were donated by the Piper family to commemorate Scouting and Guiding in Southwater.

The windows in the north aisle were replaced with stained glass and show the history of from its inception in 1552 to the arrival of the Girls from Hertford in 1985. The windows are a gift from the Old Blues and Friends of Christs Hospital. All of the recent stained glass has been designed, manufactured and installed by the artist Harold Thomson. More information on the Christ's Hospital windows is here and for more history of the School itself which lies within our Parish, click here.

These few notes cannot present more than a brief glimpse into the history of , but have been prepared as the basis for a more comprehensive booklet. If you have any information or knowledge which would be of assistance, the Vicar would be pleased to receive it.